Sure, dogs don’t have to deal with nagging bosses, piles of bills, dreaded taxes, or too many daily commitments to count. But that doesn’t mean they can’t get stressed out from time to time. In fact, a lot of us dog parents unknowingly cause our canine kids stress. Say what?! Here are 10 ways that you could be stressing out your dog (and what to do instead):

I know this sounds silly, but have you ever forgotten that your dog is, well, a dog? By nature, canines sniff, bark, chew, dig, roll around, and go to the bathroom wherever the heck they want. Oh yeah, and they’ll also reach for yummy food whenever it’s in sight without giving any thought to sharing! When we bring dogs into our homes, though, we immediately starting telling them where they can and cannot go, how long they get to wander and explore, and how long they have to hold their bladder before getting the chance to relieve themselves.

While it’s important to train your dog, don’t punish your pup for doing what comes natural to him. Instead, train him! Redirect his attention and energy with positive reinforcement.

2) Pointing or Shaking Your Finger At Them

This is a huge stress trigger for your pooch – especially when the finger wag is accompanied by a stiff body and a stern voice. Again, when training your pup, focus on redirecting inappropriate behavior and stick with positive reinforcement. Treats. Treats. Treats.

Dogs are creatures of habit and find comfort in consistency. If you let your pup sleep in the bed one week and then scold him for curling up on your pillow to catch some zzzs the following week, he is going to get very confused. It’s the same with eating table scraps. If you toss your dog some leftovers when you’re eating at the table one week and then push him away after begging for a little nibble the following week, he isn’t going to understand. Ultimately, this confusion causes stress.

When you create house rules it’s important to stick to them! Additionally, it’s not just you who needs to be consistent. Rather, everyone in the entire household needs to follow/enforce the same rules.

When you’re teaching your dog commands, it’s important to choose one trigger word and stick to it. For example, if you teach your pooch to lay down by using the verbal cue “down” then stick with that cue. Don’t change it up by sometimes saying the word “lay” and other times using the cue “floor.” Remember – your dog doesn’t know English and various verbal cues for the same command will just confuse him (which will stress him out). Consistency is key.

5) Not Getting Enough Physical Exercise

While some dogs require more exercise than others (find out which breeds need the most exercise here), a sedentary lifestyle will make any dog go a little stir crazy. Have you ever heard the saying, “A tired dog is a good dog”? Well, it couldn’t be truer. Exercise is important for beating doggy boredom, preventing pent up energy and stress, preventing behavioral problems, keeping your pup in good shape, and warding off various illnesses. Get exercise ideas here.

6) Not Getting Enough Mental Stimulation

“Dogs were bred to do jobs for us. As our house pets, they no longer have jobs. We can, however, enrich their lives, relieve pent up stress and energy, and prevent unwanted behaviors by working their brains. Some ideas for mental stimulation include puzzles, food dispensing/interactive toys, scent games like Find It! and Nose Work, Hide-and-Seek, walks on long leads or off leash (if possible), and fun classes like agility.”

When your dog is put in a stressful situation (like going to the vet or visiting the groomer), do you have a tendency to calmly repeat, “It’s okay … it’s okay”? I’m guilty! While we may use this phrase with good intention, experts say our dogs perceive it to mean something bad is about to happen, which just winds up stressing them out. It’s all about negative word association.

Do you like when people stare at you? I didn’t think so. Well, dogs don’t like it either. In the canine world, extended eye contact is perceived as confrontational. When a dog feels challenged it raises their stress level.

9) Holding Them While You Hug and Kiss Them

Alright … so this one isn’t as straight forward as the other stress triggers on this list. Some dogs love to receive affection from their human parents. My two dogs, Diego and Gigi, are the perfect example. In fact, my little Gigi will often hop into my lap and throw her arms around my neck as she attacks me with kisses. Maybe your dog does the same thing. However, it’s important to be mindful that some dogs feel trapped when humans wrap their arms around them (and there’s a huge difference between tight hugs and light cuddles). Restraining hugs can make your dog feel nervous and stressed. So pay attention to their body language.

It’s always best to let a sleeping dog sleep. If you start shaking your pooch or yelling at them to wake up, it will immediately cause their stress levels to rise.

How To Remove Pet Hair From Every Surface

How To Make Homemade Dog Food in a Slow Cooker 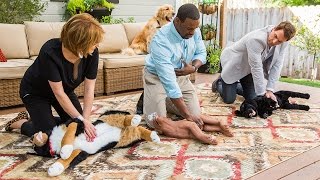 Dog First Aid: 3 Must-See Videos That Could Save Your Pup’s Life

The Scoop On Dog Poop

5 Creative Ways You Can Help Out Shelter Dogs In Need

7 Reasons Your Dog Is Peeing In The House

What to Do When Your Cat Won’t Eat

4 Tips To Easily Give Your Dog Medicine

5 Great Ways To Stimulate Your Dog

5 Tips To Get Your Dog To Stop Barking